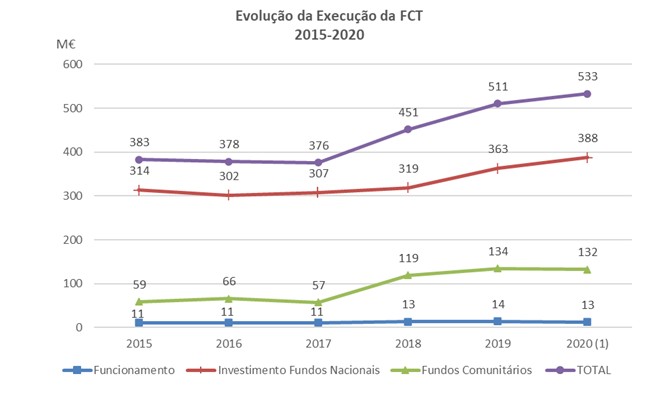 The continued growth of FCT's execution has been based on a clear S&T policy based on the qualification and employment of qualified human resources (figure 2) and on the valorization and diversification of scientific institutions, thus resulting in an effective process of European convergence and attraction of centrally managed community funds (table 1).

The growth in recent years is associated with the following main programs (figure 2):

3. Institutions, including multi-year support to R&D Units, Associate Laboratories, Collaborative Laboratories and S&T Infrastructures and Equipment, which represent an investment of around 113 M€ and 21% of the total.

4. R&D projects, including support for R&D activities within the scope of projects supported by the FCT in all scientific areas, as well as the implementation of thematic R&D programs such as preventing and fighting forest fires, Vale do Côa, empowering the public administration with Artificial Intelligence, projects within the scope of the pandemic and Covid-19, among others. In 2020, the investment in R&D projects was 108 M€, representing 20% of the total;

5. International cooperation, with an investment of 52 M€ and 10% of the total, including participation in S&T organizations (e.g., CERN, ESA, ESO, EMBL, INL, AIR center, among others) and international partnerships, as well as strengthening the GoPORTUGAL - Global Science and Technology Partnerships Portugal program;

6. Advanced computing, scientific culture and community support, including access to publications and communications, with an investment of 30 M€ and 6% of the total, including activities of the Ciência Viva Agency, access to the B-On Library and the Science, Technology and Society Network (RCTS), the implementation of the INCoDe.2030 program, the Advanced Computing Strategy, ACT2030, and the installation of the "Minho Advanced Computing Centre, MAAC", as well as the financing of FCT's information and communication systems.

The operating expense is less than 3% of the total investment, which demonstrates a high efficiency of public expenditure management, especially when compared to other funding agencies and evaluation of science and technology activities. In 2020, operating expenses were 13 M€, corresponding to 2.4% of total execution.

Figure 2: Evolution of investment expenditures by area in 2015 and 2020