FCT and the Science and Technology Commission of the Shanghai Municipality (STCSM) signed on June 24, in Lisbon, a Memorandum of Understanding to strengthen cooperation in science and technology between the Portuguese and Chinese scientific communities, through the development of joint programs. 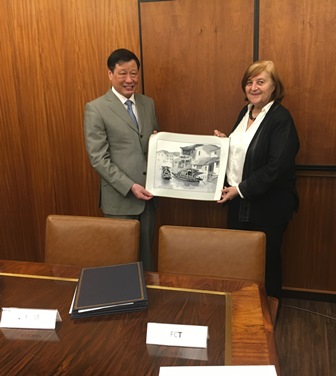 The STCSM is responsible for the scientific and technological development of the city of Shanghai, including support for the cooperation of national and international institutions in science and technology, and this is the first time that FCT signs a formal cooperation instrument with an international municipality. The signing ceremony was attended by the Mayor of Shanghai, Ying Yong, and the President of FCT, Helena Pereira. Both welcomed the signing of the protocol and recalled the existence of numerous areas of common interest that can be explored, such as research and development of technologies in the areas of digital and information, energy, aerospace, biology, medicine and pharmacy, as well as material and marine sciences.

The MoU will be implemented by FCT and STCSM through actions such as the exchange of scientists, support for joint research projects and technological innovation, the organization of conferences, workshops, seminars and scientific meetings on themes of mutual interest, the development of joint studies, or the creation and strengthening of cooperation groups or networks.

This agreement is a recognition of the importance of science, technology and innovation in promoting the growth and competitiveness of both countries' economies, and will allow the strengthening of cooperation between Portuguese and Chinese scientists.