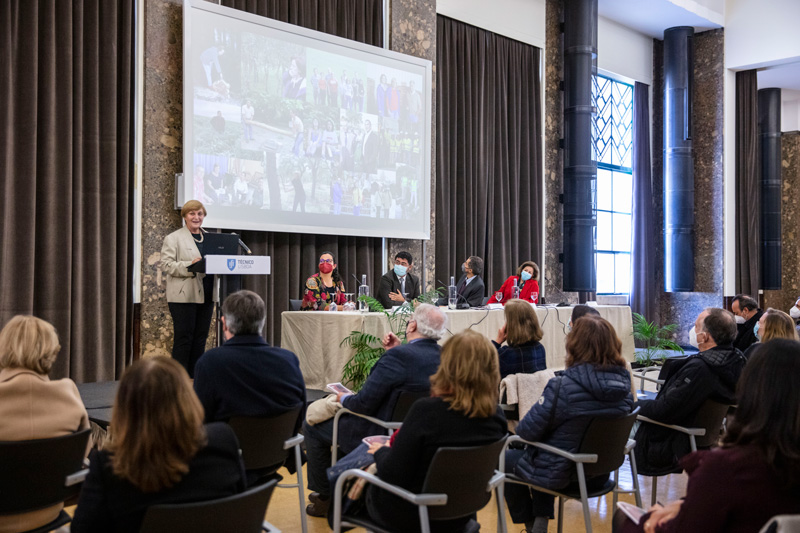 The Instituto Superior Técnico held last December 6th the Maria de Lourdes Pintasilgo award ceremony. As in previous years, the 5th edition of the prize rewarded a young graduate of the institution whose research has been recognized for its scientific merit and a former student who, having finished her studies at Instituto Superior Técnico more than 15 years ago, has stood out for her professional career and/or social contributions. In this edition, the prize was unanimously awarded, respectively, in each category, to Maria Teresa Parreira, for the quality of the research carried out in her Master's dissertation and for her active involvement in student support activities, and to Helena Pereira, president of FCT's Board of Directors, for her "meritorious effort in holding demanding high-level public positions at the service of the academic and scientific community" and for her contribution to the "progress of science" and to "technological innovation", according to the jury's opinion.

The creation and awarding of this award, entirely female, was the responsibility of the Gender Balance@Técnico working group, whose intentions were well highlighted by the group's coordinator, Beatriz Silva: faced with a context of "under-representation of women in STEM fields", created and perpetuated by a history of gender prejudice - among them, the idea that "engineering is for men", it became necessary to implement active measures to counteract these imbalances, of which this award is intended to be an example.

The figure that gives it its name and its motto, Maria de Lourdes Pintasilgo, stood out at a time when the social roles of women were strongly conditioned by the regime, by her "affirmation in the space of men," in the words of Rogério Colaço, president of the Instituto Superior Técnico, being one of only three women - out of a student body of about 250 students - studying at the institution in the late 1940s, and having become, still in the 1950s, the first woman accepted into CUF's senior technical staff, and later asserting herself in politics as the only woman, to date, to head a government in Portugal. In the current moment, in which "equal opportunities between genders is still a long way to go and not yet reached", the president of Técnico. underlined the need to continue the fight for gender equality. More than just a tribute to the figure of Maria de Lourdes Pintasilgo, the award intends to "contribute for this path [of effective gender equality] to continue to be traveled", rewarding crucial contributions of Técnico's students and former students to science and technology, and thus highlighting their work.

The award winners also attached great importance to these broader purposes of the prize. The young recipient, Maria Teresa Parreira, highlighted, in what she called the more "political" side of her speech, the idea that "we cannot recline in our chairs and pat ourselves on the shoulder that the progress that is already being made is being made in the right direction and doesn't need us. In her turn, Helena Pereira pointed out, in this line, the fact that she recognizes that her path, marked on the one hand by her passage through the Instituto Superior Técnico and the early recognition of the quality of her work by national and international institutions and, on the other hand, by the FCT's direction, has contributed, in her words, to a "fantastic period of growth [of science] that we have experienced in the last 30 years", and will have "been inspiring for some" - or, we could say, some.

In addition to the undeniable personal, academic and professional merit of the award winners, which was highlighted in all the speeches, everyone at the session, from those responsible for the institution promoting the award to the winners themselves, always stressed the relevant social and political dimension of promoting this type of initiative, which is still necessary, despite the fact that, as Rogério Colaço pointed out, we are already in the 21st century. Maria Leonor Beleza's intervention, as president of the Champalimaud Foundation, once again challenges the male majority in positions of power, putting precisely this point into question, highlighting the "unequal sharing [between genders] of power at the highest levels", despite the fact that there tends to be more women with higher education. To close the session, Manuel Heitor, as Minister of Science, Technology and Higher Education, highlighted the work of the award winners, stating the need to continue the debate around gender issues, in order to address the horizontal and vertical dimensions of inequality and, given the near absence of women at the top of the teaching, scientific and business careers, "to recognize those who effectively had the merit of reaching the top" despite the structural conditions of disadvantage.