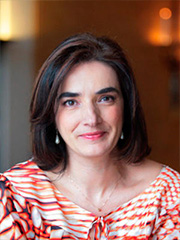 The European Commission today launched it’s new Scientific Advice Mechanism (SAM), with the announcement of the leading scientists who will make up the first High Level Group of scientific advisors to the European Commissioner for Research, Science and Innovation, Carlos Moedas. The group of seven advisors includes Elvira Fortunato, director of CENIMAT and i3N – Institute of Nanomaterials, Nanofabrication and Nanomodeling, Full Professor and on the Scientific Council of the Faculdade de Ciências e Tecnologia da Universidade Nova de Lisboa (FCT-NOVA).

Elvira Fortunato pioneered European research on transparent electronics, namely thin-film transistors based on oxide semiconductors, demonstrating that oxide materials can be used as true semiconductors. In 2008, she was awarded an Advanced Grant in the first ever ERC call. In the same year Elvira Fortunato and colleagues produced the first paper transistor, thus launching a whole new field in the area of paper electronics.

Her work has been acknowledged through multiple scientific and society awards, including the Grand Officer of the Order of Prince Henry the Navigator (granted by the President of the Republic in 2010). Elvira Fortunato was a member of the Portuguese National Scientific & Technological Council between 2012 and 2015 and a member of the advisory board of DG CONNECT.

The members of the High Level Group, selected following an open call for nominations and the recommendations of an independent identification committee, are:

The Commission’s SAM includes a six million euro grant to European academies and learned societies, which will support collaborations between academies across Europe to provide science advice for policy. According to the Commission, this grant and the High Level Group, “mark a new approach to the use of independent science advice in Commission policy making”.