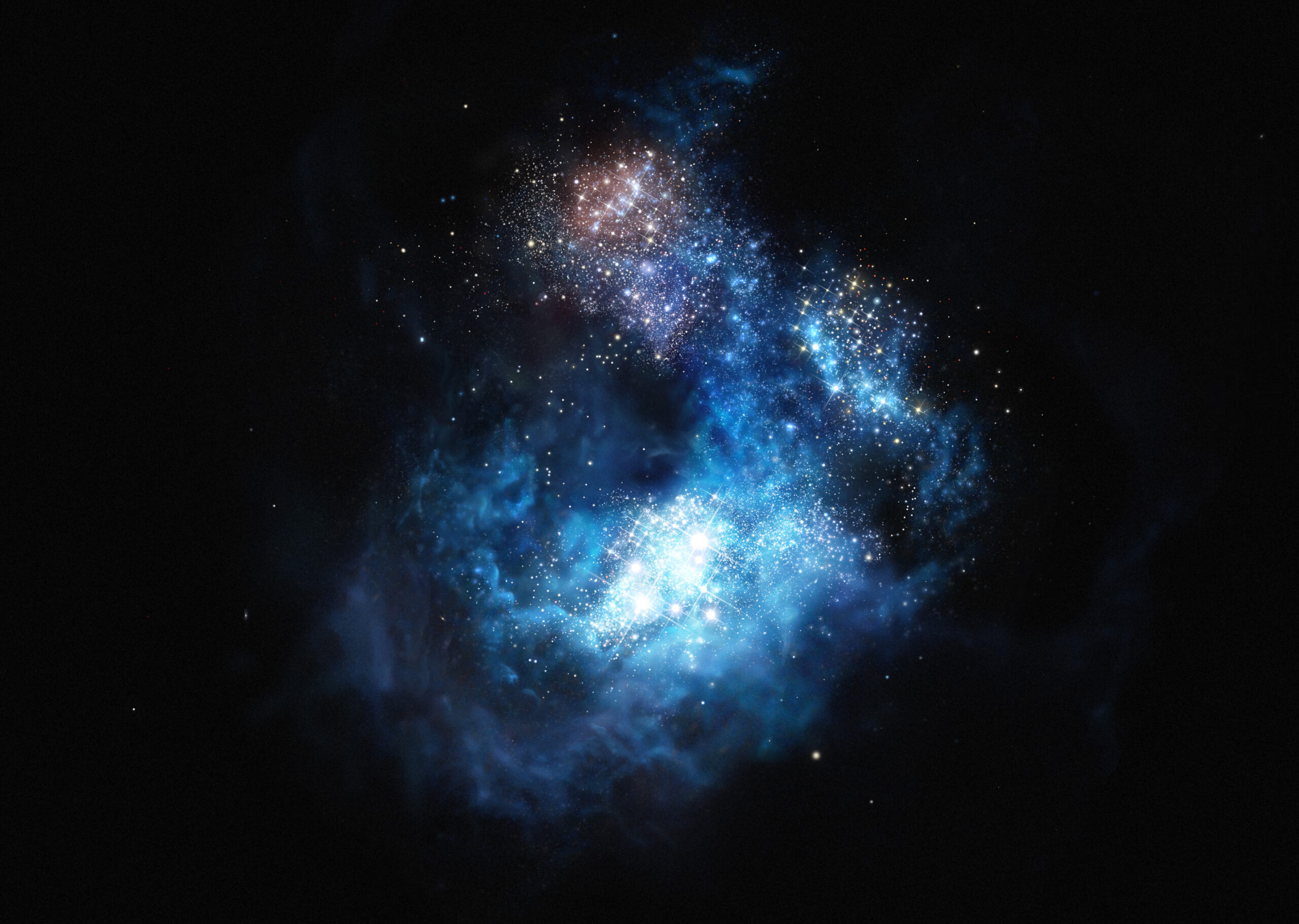 An international team led by astrophysicist David Sobral has discovered the brightest galaxy of the early Universe ever, and found strong evidence that it contains examples of the first generation of stars to be formed. These findings confirm a longstanding theory for the existence of the so-called Population III stars that were born out of the primordial material from the Big Bang. These massive, brilliant objects were the creators of the first heavy elements in history, from which the stars around us today were forged, as well as the planets that orbit them, and life as we know it.

These first stars must have formed out of elements known to exist prior to stars: hydrogen, helium and trace amounts of lithium. They would have been enormous — several hundred or even a thousand times more massive than the Sun — blazing hot, and transient — exploding as supernovae after only about two million years. The search for physical proof of their existence had been inconclusive. Until now.

The team decided on a different approach to the rest of the world, and turned to mapping large expanses of the sky, rather than focusing on a narrow and deep study of a small area of the sky. In their search they used the VLT – Very Large telescope of the European Southern Observatory (ESO), the W. M. Keck Observatory and the Subaru Telescope as well as the NASA/ESA Hubble Space Telescope, to peer back into the ancient Universe, to a period approximately 800 million years after the Big Bang.

David Sobral, who is also a researcher at the University of Leiden, explains, “We were aware of the risk (…) It was fantastic when we discovered the CR7 galaxy, the brightest ever found in the primitive Universe”. And the findings went further, “By joining the pieces of the puzzle, we understood that we have discovered something bigger – a Holy Graal of astronomy – the first stars”.

The Portuguese astrophysicist is immensely proud of the team’s work. As an FCT Investigator selected in the 2012 call, it is clear to him that “This discovery (and several others) were made possible by the FCT Investigator programme, which I am certain has the potential to allow universities and the whole country to make the most of FCT support (which is level with the best funding agencies in the world). Without the FCT studentship I was awarded to do my PhD at the University of Edinburgh, I would not be here today, leading my own team and competing with the best in the world. I would also like to highlight how important it is that Portugal is a member of ESO, so that we had the necessary observation time to make the discovery (and of ESA – which secured access to the Hubble telescope)”.

The results of the team (which includes researchers form the University of Leiden, University of Californa and University of Geneva) are to be published in the Astrophysical Journal. They have been included in ESO’s list of Top 10 astronomical discoveries made using ESO telescopes.

This year marks the 15th anniversary of Portugal’s accession to ESO. Astronomers, funders and governments in Portugal recognize that being one of the 16 member states of “the world’s most productive ground-based astronomical observatory” is crucial to building and sustaining the country’s small but highly productive planetary sciences community acknowledge. At the public event organised by FCT for this anniversary, Tim de Zeeuw, ESO Director General, congratulated Portugal on its participation in ESO, in terms of good use of observation time on ESO telescopes (via competitive calls), growing contributions to instrumentation and steadily increasing industrial involvement.

Paulo Garcia, the Portuguese delegate to the ESO Council, underscored these achievements, reminding those present that Portugal has a “winning deal” with ESO. The high scientific impact of space sciences and the proven capacity of space science research units to secure funding from the EU (71% versus 35% for other FCT-funded research units) means that there is a superior return on the country’s 1% contribution to the ESO budget.