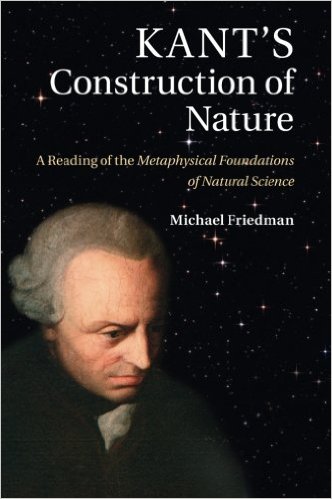 The 2015 Fernando Gil International Prize has been awarded to Michael Friedman’s book Kant’s Construction of Nature: A Reading of the Metaphysical Foundations of Natural Science, published by Cambridge University Press (2013).

Michael Friedman has a real admiration for Immanuel Kant’s philosophy. He is convinced that Kant’s approach can be adapted to give a satisfactory account of contemporary science. In this book, Michael Friedman gives a radically new reading of Kant’s key text, Metaphysical Foundations of Natural Science. The jury was particularly impressed by the depth and accuracy of his scholarship – the work of many years of study.

Kant’s text is related to Newton, Euler and Lambert, and to Kant’s own pre-critical writings. The Metaphysical Foundations was published in 1786 between the first (1781) and second (1787) editions of Kant’s Critique of Pure Reason. It is therefore a central text for considering the development of critical philosophy as a whole. For the neo-Kantian school, of which Friedman is such a prominent member, this detailed study of Kant provides the basis for constructing a philosophy of contemporary science. These then are the reasons why the jury decided that the book is a worthy winner of the Fernando Gil prize for 2015.

Michael Friedman is the Frederick P. Rhemus Family Professor of Humanities, Director of the Patrick Suppes Center for the History and Philosophy of Science, and Professor of Philosophy at Stanford University. With a PhD from Princeton University, he has taught at Harvard, the University of Pennsylvania, the University of Illinois at Chicago, and Indiana University, and now Stanford. Some of his more recent books include Reconsidering Logical Positivism (1999), A Parting of the Ways: Carnap, Cassirer, and Heidegger (2000), and Dynamics of Reason: The 1999 Kant Lectures at Stanford University (2001). He is the editor and translator of Immanuel Kant: Metaphysical Foundations of Natural Science (2004), co-editor of The Kantian Legacy in Nineteenth-Century Science (2006), and of The Cambridge Companion to Carnap (2007).

The Fernando Gil International Prize is a joint initiative of the Portuguese government, represented by the Fundação para a Ciência e a Tecnologia (FCT), and the Calouste Gulbenkian Foundation, to honour the memory and work of the philosopher Fernando Gil (1937-2006). Every two years the Prize acknowledges a work of outstanding excellence in the field of Philosophy of Science, either on general epistemological problems or related to specific scientific areas.