Raquel Gaião Silva is the Youth Ambassador for Climate Change 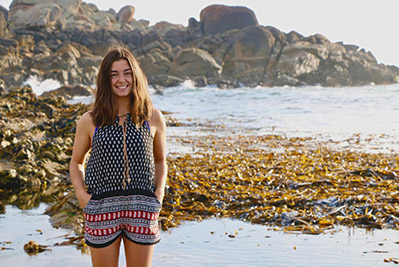 Raquel Gaião Silva, biologist, 24 years old, from Viana do Castelo, was nominated as Youth Ambassador for Climate Change. The young student of the master's degree in Marine Biodiversity and Conservation (EMBC) of the University of Algarve (UAlg) received this distinction after her participation in The Global Youth Video Competition, organized in the scope of the United Nations (UN) Climate Summit. She was also one of the winners of the Young Researchers' Award from GBIF - Global Biodiversity Information Facility, an international network for sharing biodiversity data, which allowed her to develop her research.

Raquel Gaião Silva's application to the contest promoted by the UN consisted of a video in the form of a mini-documentary about Ocean Alive, a Portuguese cooperative dedicated to protecting the ocean, and the work was presented at the Climate Summit, held on September 23 in New York. The video was the first selected from among 400 candidates from all over the world. Raquel is now scheduled to travel to Chile, where she will participate in the Conference of the Parties (COP25) next December.

Raquel currently collaborates with BlueBio Alliance, a private non-profit association whose mission is based on fostering relationships and dynamics between stakeholders and promoting entrepreneurship focused on marine bioresources and sustainable businesses.

The GBIF - Global Biodiversity Information Facility network aims to provide open access to information on all types of life on the planet. The research of Raquel Gaião Silva, with the support of the Center for Marine Sciences (CCMAR) and data provided by GBIF, in addition to other sources, focuses on the influence of ocean temperature on the distribution of macroalgae along the coastal strips of Portugal and Spain, from the Bay of Biscay to the Strait of Gibraltar. The Portuguese Node of GBIF is based at the Instituto Superior de Agronomia of the University of Lisbon since 2015, under a protocol with the Foundation for Science and Technology. The objective of the Portuguese node of GBIF is to support national institutions in the provision of national and international biodiversity data.